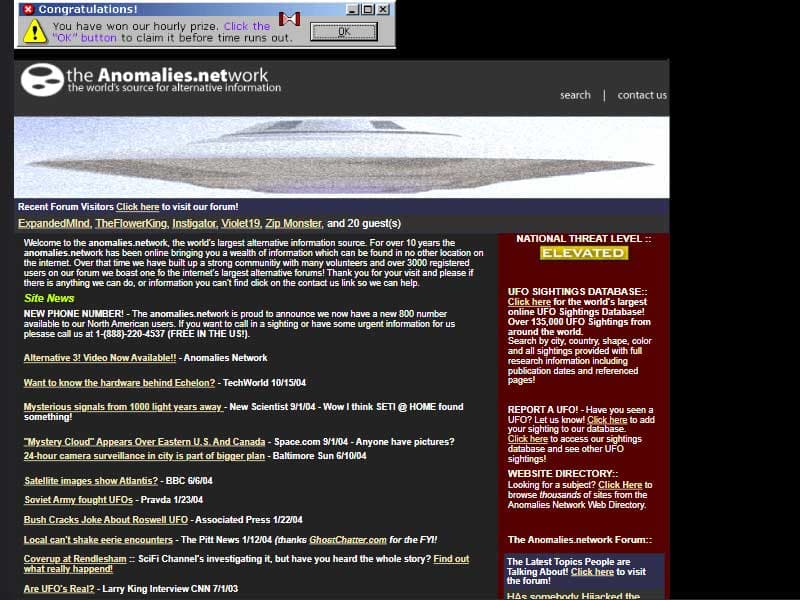 Anomalies was once the world’s largest online UFO/paranormal community, with the goal of either mirroring or downloading the world’s FTP and web archives and placing them into one super archive, which made locating fringe information easier. The site ran in its original form from about 1999 until around 2017, at which point it was rebranded as Paranoia Magazine.

Olav Phillips was the founder of the Anomalies Network, bringing decades of experience in UFO research and study, Olav’s self-proclaimed passion was serving as an archivist for the UFO and paranormal community. With a database of over 150,000,000 recorded sightings, his area of specialization was the application of the latest technology to the field of ufology. Phillips used data science to build new sets of information, put information together and look at it in different ways, and come up with new theories.

Simply put, The Anomalies Network was a vast archive of information, media, and resources which was designed on the simple premise that only through raw information can people form their own opinions about what is happening, and the site was designed around those ends. Anomalies did not support or deny any of the claims made in the files they housed; they simply provided them for you to decide for yourself.

Do you have memories of this community? Or have you found something worth recovering in the datasets above? Let us know in the comments below!

I remember Anomalies being one of the first fringe communities I ever found. I was late to the Titor saga, only witnessing the tail-end on the Art Bell and original TTI forums, but found my way to Anomalies shortly afterward and was fascinated by the people there who had actually spoken with him - Namely @Darby (who I was excited to have recognized from Art’s old forums) and Pamela.

I would have been 17 at the time, and I thought what Olav and his crew had was absolutely astonishing. The sheer amount of content being collected, and the community of people who opened my brain up to all kinds of new theories and ways of thinking…

I never joined, because I entered the army shortly after the events of 9/11, but checked in and lurked for many years. What Anomalies had is part of what inspired me to begin participating in other communities, and is why I jumped at the chance to join Time Travel Forum when it was still brand new.

Looking at the number of records you found, I didn’t imagine Anomalies was that big. Pretty impressive.

Do you know how many posts they had at their peak, when it went down?